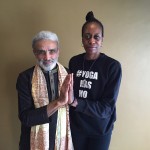 Last week I was very fortunate to meet, and attend the weekend workshop of incredible Yoga Master Dharma Mittra, hosted by IndabaYoga.

I was meeting Dharma at IndaYoga Studio in Marylebone, he was so welcoming it was like meeting an old friend, this felt more so as I was able to interview him via Skype. Dharma at 76 has been practising yoga from his teenage years and comes originally from Brazil.

1984 is when Dharma international fame arose with the creation of the Master Yoga Chart of 908 poses. He also revealed that his has been updated with an additional 23 poses and will be available in the New Year.

A Legendary yogi who moved to New York City to study with his Guru Sri Swami Kailashananda. In 1975 when he felt it was the right time he opened the Dharam Yoga Centre. No only does he still practice but continues to teach yoga and travels internationally to give workshops.

I love his yoga philosophy as he truly believes that every one can truly do yoga, which is something that I strongly believe. But he made me see this at a even deeper level. He states that ‘if all you do is to breathe this too in fact is yoga’.

From the interviews and the workshop it was clear to see that he has dedicated his life to yoga and this comes through in not only his words but actions as well.

The workshop took place at Lords Cricket Ground, was so energetic and inspiring. I went through a mixture of feelings, been on the edge of my mat trying to retain all the valuable words of wisdom that he imparted but also the energy in the room.. I found the yoga practice to not only to be graceful, fun and dynamic a combination that I found most enjoyable.

For me it felt like an evening of celebration in the company of likeminded yogis. What-else would I want to do on a Friday night!

“Felt like I was in expert hands practising Dharma Mittra’s class on Friday night. His simple, straight forward approach to asana, combined with deep insight and humour allow you to physically and mentally let you go and explore a deeper yoga journey. Pure bliss!”

The evening concluded with Song and laughter. I so wish that I could have attended the entire workshop as I know that I would have come away with so much more.

If you want to hear first hand about his philosophy and teachings you can listen to the interview here: